A student was reviewing my site recently and was confused about a photo that was featured prominently. It could do with a bit of explanation … The image seen here can be found at the top of my homepage and in a few other places. In English it is known as a strawberry tree and my use of it isn’t random. I spent 20 years living in Madrid (I returned to Sydney in 2016) and the symbol of Madrid, found on its coat of arms, is ‘El Oso y el Madroño’ (The Bear and the Strawberry Tree). As you’ll see, the symbol features a bear reaching up for some berries from the tree. (They are delicious by the way and yes, bears were once common in Madrid!) The plant is not cultivated commercially but is found in mountainous areas.

There’s a statue representation of it in the Plaza del Sol (The Gate of the Sun), the theoretical centre of Madrid. I had my teaching practice there for many years and it was also the first location of the teacher training programme I had in Madrid. 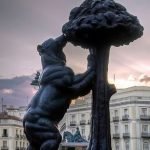 In my imagination, the bear was performing a procedure that FM Alexander developed which he called ‘a position of mechanical advantage’ but was later renamed ‘Monkey’ by the trainees on his first training course. So I adopted the business name of ‘The monkey and the Strawberry Tree’. This might sound like a strange thing to do, but every Madrileño would have understood the allusion. I used the Madroño image on my Spanish website and was so fond of it I decided to import it into my Australian website as well. Unfortunately, naming my business here ‘The Monkey and the strawberry tree’ would not mean anything to anyone.

So that answers that … now for some bonus trivia:

Strange story: on my last trip to Madrid I found some plush toy monkeys in a duty free store in the airport. They were blue for some reason and were wearing t-shirts with ‘Madrid’ printed on the front. It struck me as a bit weird —there are no monkeys in Madrid and the city is not in any way associated with them. I commented ironically to a shop assistant (in Spanish) how typical of Madrid they were and he replied “Yes, you know, the Monkey and the Madroño.” Have I had a lasting impact on the city …?

Another oddity: Out walking in Sydney one day I headed north over the Harbour Bridge and continued on to St Leonards Park. Rugby League fans will probably know this is where you’ll find North Sydney Oval, home of the North Sydney Bears. Approaching the main entrance from Ridge Street, I stumble upon a Strawberry tree that has clearly been there for decades. I don’t know the history of this particular tree, but I find it hard to believe it’s a coincidence. The Bears and the Strawberry Tree? Someone from the Spanish consulate in Sydney must’ve had something to do with this!